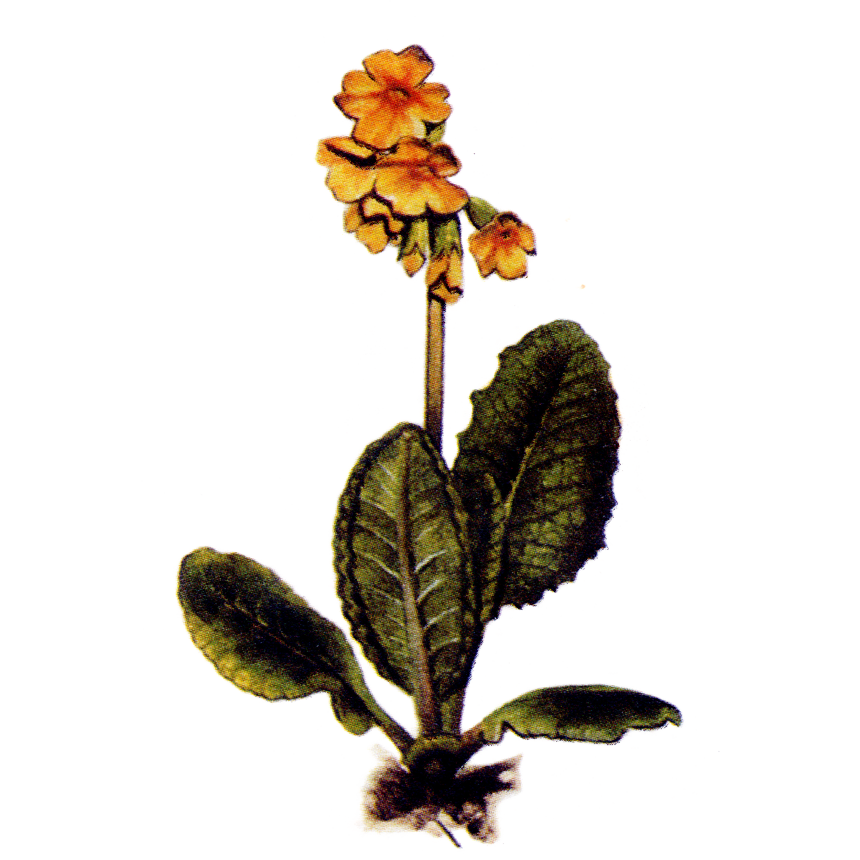 Cowslip
Primula officinalis
Scientific Name
COMMON NAMES
Herb Peter, Key Flower, Key of Heaven, Fairy Cups and Paigles.
The golden yellow blossoms of this variety of Cowslip have an honey-like, agreeable fragrance and, forming an umbel on a long stalk, rise out of the centre of a rosette of leaves. It is found mostly on mountain slopes and pastures.
The "tall Cowslip" (Primula elatior), which is found abundantly in the countryside, carries on its long stem light yellow flowers with only a light fragrance. Both have the same medicinal value and can be used in the same way.
The third variety Auriculus (Primula auricula) is a frequent garden plant in Great Britain, though native to the Alps, where it is protected.
At a dinner I sat next to a gentleman who was taking the waters nearby. This treatment had been his last hope but now that it was drawing to a close and no improvement in his health was in sight, he was at his wit's end. Despite taking strong sleeping pills he could not find sleep. As soon as he lay down, a pain - as if someone was stubbing out a cigarette on the sole of his foot - shot through him. He felt close to a nervous breakdown. I told him I knew of an excellent tea for insomnia. But would it help him, he who had taken sleeping pills for so long? He tried it. lt was on the 7th of December, 1976 when we met. Seven days later I met some of his friends who told me that our common friend could sleep again. At the same time he had lost the pain in his feet. The tea had helped in such a short time, given him back his health and taken away the nervous disorder. His physician asked him for the recipe of the special tea for insomnia.
Special Tea for Insomia Recipe
50 gm. Cowslip
25 gm. Lavender
10 gm. St. John's Wort
15 gm. Hops cones
5 gm. Valerian roots
This tea should be preferred to all chemical sleep inducing remedies. Sleeping pills destroy the nervous system, whereas the tea removes nervous complaints.
My mother gathered Cowslips every spring, because she knew how soothing they are for the heart and nerves. Pick only the umbel. Through its blood cleansing properties, it rids the body of the toxic sub stances which lead to gout and rheumatic illnesses. The Abbé Kneipp was a great supporter of Cowslip; a painting shows him holding a Cowslip. He said: "He who has a tendency to rheumatism and gout, should drink 1 to 2 cups of Cowslip tea daily over a long period. The intense pain will slacken and with time disappear."
Cowslip tea is of value in strengthening the heart and nerves, eases the pain of migraine and nervous headaches, is excellent for inflammation of the heart muscle, dropsy and tendency to stroke. A decoction of the roots, mixed with honey, makes a good tea for the kidneys, helping to expel stones in the bladder.
Blood Purifying Spring Tea Recipe
50 gm. Cowslip
50 gm. Elder flower shoots
15 gm. Stinging nettle
15 gm. Dandelion roots
Take one heaped teaspoon of this mixture to 1/4  litre of boiling water, infuse for 3 minutes. May be sweetened with a little honey.
Elder flower shoots are the cluster of flowers in their unopened green state.

An excellent remedy for heart complaint is Cowslip wine, which can be prepared in spring. A 2 litre bottle is loosely filled with fresh flowers of Cowslip (whole umbels) and pure white wine is poured over it. The flowers have to be covered. The bottle is kept, loosely stoppered, in the sun for 14 days. For heart complaints, take a sip of this wine when needed. People with a heart disease should take three tablespoonfuls a day.