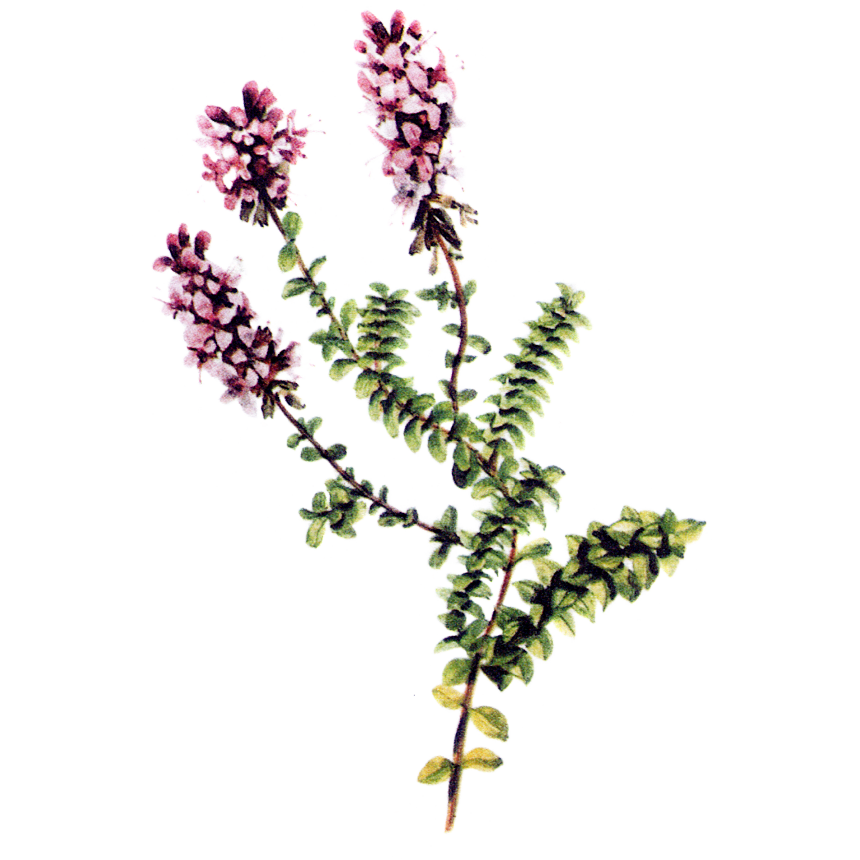 Thyme, Wild Thyme
Thymus serpyllum
Scientific Name
It grows on sundrenched rocky ground, in heaths, in dried-up lawns and near ant-hills. As it must have heat, it flourishes especially where the reflected heat from stones can reach it.
In the midday sun the dense purplish flower cushions perfume the air which attracts insects and bees to them. As long as I can remember these wonderful flowers with their aromatic fragrance have had a great attraction for me.
Thyme came to us from the Mediterranean countries during the eleventh century and the cultivated form, grown mainly in our gardens, is known as Garden Thyme (Thymus vulgaris) sometimes as Mother Thyme. ls grows taller than the Wild Thyme, up to 50 cm. Both plants have the same medicinal properties.
Thyme was well known in ancient times and old records state: "Thyme is most of all pungent and hot. It increases the flow of urine and menstruation, in normal birth speeds up delivery and dispatches miscarriages as well. A draught of it cleanses the noble internal parts of the body."
The Abbess Hildegard von Bingen refers to Thyme as a medicine for leprosy, paralysis and nervous complaints. He who drinks a cup of Thyme tea instead of coffee in the morning will soon feel the beneficial effect: enlivened spirits, great comfort in the stomach, no coughing in the morning and an overall well-being.
For facial neuralgia a herb pillow, made of Camomile, Thyme and Yarrow, picked in the sun and dried, is placed on the affected area and 2 cups of Thyme tea are sipped throughout the day. Should there be cramps, a Club Moss pillow is used as well.
A 79 year old farmer who had suffered from facial neuralgia tor 27 years, had had a couple of operations, but it got worse. ln the last couple of months, his mouth was pulled almost up to the ear and this caused great pain. First he used Swedish Bitters employed as a compress which brought a slight relief. Only after he used the above mentioned herb pillow did he benefit greatly from it. He kept drinking Thyme tea long after the neuralgia was gone.
My child, when 4 years old, after typhoid fever could not regain its strength. For 2 years, we tried several things without success. Then, after a single Thyme bath lasting 20 minutes, a "different" child emerged. From this day on he simply blossomed.
Thyme is gathered during the time of flowering, from June to the beginning of autumn. Picked in the midday sun it is most effective. Thyme oil (see "directions") is used for paralysis, stroke, multiple sclerosis, muscular atrophy, rheumatism and sprains.
For stomach and menstrual pain as well as abdominal cramps, Thyme is recommended for internal and external use. Externally, Thyme picked in the sun and dried is applied as a herb pillow. Before going to sleep, the herb pillow is warmed in a pan and applied to the stomach or abdomen. This pillow is also recommended for swellings and contusions.
An old herbal remedy for illnesses of the respiratory passages is Thyme used with Plantain. A tea, made of equal proportions of Thyme and Plantain with lemon and raw sugar added, is effective for whooping cough, phlegm in the lungs and bronchial asthma. This tea is prepared fresh 4 to 5 times a day. lf there is danger of pneumonia, a big sip, taken every hour, is effective. Luckily, many mothers have not forgotten Thyme, but seldom do they realize that drinks directly from the refrigerator can lead in children to chronic bronchitis which in later years can develop into emphysema.
Thyme tincture (see "directions") is used as a rub or massage to strengthen the limbs of weakly children; people who suffer from multiple sclerosis should use it, too.
A family could be spared a lot of trouble, if the sick child is treated in time with Thyme tea or Thyme baths. Many a nervous child has found a restful sleep after a Thyme bath. People who suffer from nervous over stimulation or depressions will find relief in a short time through such baths.
That Thyme is a recommended remedy for alcoholism should not be forgotten. Over a large handful of Thyme 1 litre of boiling water is poured, covered, infused for 2 minutes and poured into a thermos flask. The alcoholic is given a tablespoon of this tea every quarter of an hour. This results in nausea, vomiting, increased bowel action, increased flow of urine and perspiration, but also great appetite and thirst. In cases of relapses, which are inevitable in the beginning but later occur less and less, the treatment is repeated.
Thyme is also recommended for epileptic fits. The tea, 2 cups daily, should be drunk for a period of two to three weeks, with a 10 day interval, all year round.
DIRECTIONS
INFUSION: 1 heaped teaspoon per cup of boiling water, infused for a short time.
BATH: 200 gm. of Thyme for a full bath (see General lnformation "bath").
TINCTURE: The flowering herbs, picked in the midday sun, are placed loosely in a bottle, 38% to 40% rye whiskey or vodka poured over them and the bottle is kept in the sun for fourteen days.
THYME OIL: The flowering herbs, picked in the midday sun, are placed loosely into a bottle. Cold pressed olive oil is poured over them to about 3 cm. above the plants. The bottle is left to stand in the sun or in a warm place for 14 days.
HERB PILLOW: The herbs are filled into a pillow and sown up.
THYME SYRUP: In a pot, layers of moist Thyme, picked in the sun, and raw sugar are alternated and pressed down firmly. This is left in the sun for approx. 3 weeks; then strained and the residue rinsed in a small amount of water, strained again and added to the first liquid. This is heated gently on a low heat until the syrup is thick-flowing, testing the consistency from time to time.
Tags: thyme, wild tyme