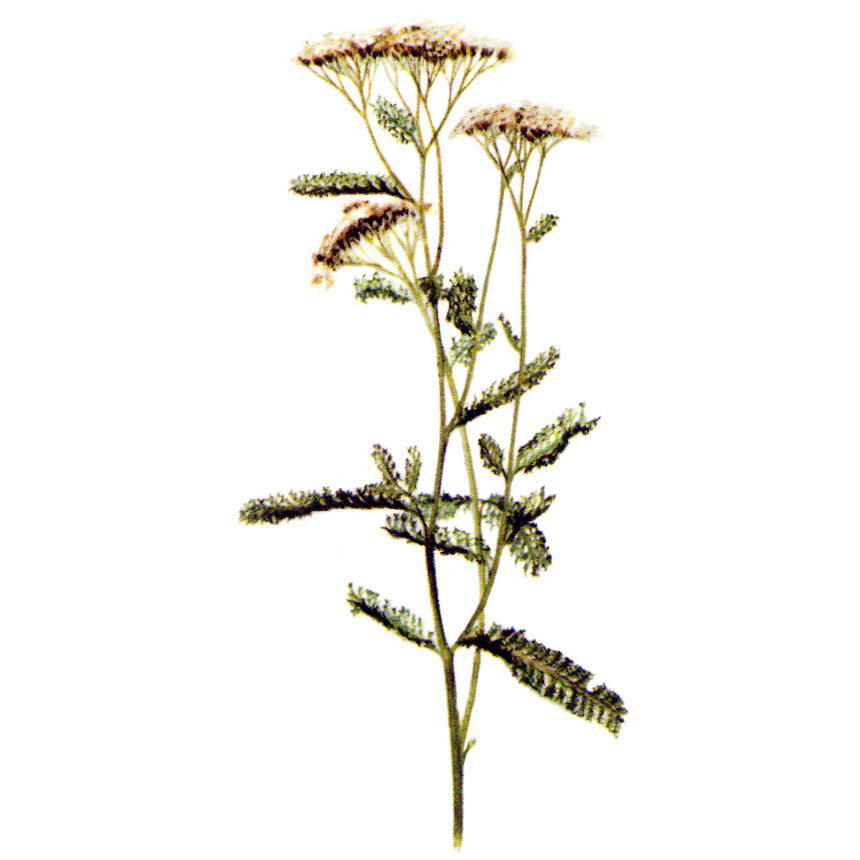 Yarrow
Achittea miltefolium
Scientific Name
COMMON NAMES
Milfoil, Nosebleed, Soldier's Herb, Woundwort, Bloodwort and Knight's Milfoil.
Yarrow is a medicinal herb that would be difficult to be without; it is of great value for many illnesses but first and foremost, it is a herb for women. I cannot recommend Yarrow enough for women. Abbé Kneipp says in his writings: “Women could be spared many troubles, if they just took Yarrow tea from time to time!” Be it a young girl with irregular menstruation or an older woman during menopause or already past it, for everyone young and old, it is of importance to drink a cup of Yarrow tea from time to time. lt is beneficial for the reproductive organs of women and they cannot do a better thing for their health than, while walking through the fields, pick some Yarrow. lt grows in meadows and pastures, by roadsides and paths. The flowers are white or pink, have an aromatic smell and should be picked in bright sunshine, since the volatile oils and, therefore, their curative quality is greater.
It was said of a young woman that she had cancer in the abdomen. She received cobalt treatment. The relatives were told that there was no cure. I thought of the Abbé Kneipp and his advice for abdominal disorders and asked the woman to drink as much Yarrow tea as she could. I was surprised when after three weeks, I received a note saying she felt great and her weight was returning slowly but surely to normal.
For inflammation of the ovaries the first sitz bath will often relieve the pain and the inflammation will slowly subside. These sitz baths are also successful against bedwetting of children and older people, as well as "whites". ln these cases 2 cups of Yarrow tea should be drunk daily as well.
For prolapse of the uterus sitz baths are taken for a long time, 4 cups of Lady's Mantle tea are sipped daily and the area of the abdomen from the vagina upward is rubbed with Shepherd's Purse tincture.
For fibroids Yarrow sitz baths are taken until a medical check-up shows no sign of them anymore.
A girl of nineteen had not yet menstruated. A gynaecologist prescribed the pill for her. Her breasts became quite large but there was no menstrual flow. She refused to continue with the pill. Her mother came to see me and I told her to give the girl a cup of Yarrow tea on an empty stomach every morning. After 4 weeks everything was in order and the girl has had no problems since.
A woman during menopause should take advantage of Yarrow tea and save herself a lot of inner restlessness and other problems. Yarrow sitz baths are also good for the health. For neuritis in arms and legs, foot and arm baths with an addition of Yarrow are soothing, but the Yarrow has to be picked in the midday sun. These baths often relieve the pain after the first use.
Dr. Lutze recommends Yarrow tea for “congestion in the head, accompanied by terrible pain, giddiness, nausea, running and weeping eyes, sharp pain in the eyes and nose bleeding…” Migraine, caused by weather changes, is often relieved after only one cup of Yarrow tea which has to be sipped fairly hot. lf the tea is drunk regularly, migraine can disappear completely.
ln old herbals Yarrow is called "cure of all ills" and can be used in cases that seem hopeless. Through its blood cleansing action many an illness is expelled from the body. lt is worth a try. That Yarrow acts directly and best on the bone marrow and thus stimulates blood renewal, is not well known. Yarrow is therefore helpful for disorders of the bone marrow, even caries, where other medication is of no avail, if the tea is drunk, baths are taken and a friction with Yarrow tincture is used. Yarrow is an excellent remedy for stopping bleeding in the lungs and used together with Calamus roots heals lung cancer.
The Calamus roots are chewed throughout the day and a cup of Yarrow tea is sipped every morning and evening. The tea is beneficial for bleeding haemorrhoids, stomach bleeding, indigestion and heartburn. For colds, back or rheumatic pain Yarrow tea is drunk as hot as possible and in large amounts. The tea activates sluggish kidneys, rectifies lack of appetite, dispels flatulence and stomach cramps, is beneficial for liver disorders, inflammation of the gastro-intestinal tract and regulates the movement of the bowels.
Since the Yarrow helps in circulatory disorders and vascular spasm, it is recommended for angina pectoris. - Sitz baths or washing with a decoction of Yarrow relieve troublesome itching in the vagina. An ointment is prepared from Yarrow flowers and used for haemorrhoids.
DIRECTIONS
INFUSION: ¼ litre of boiling water is poured over t heaped teaspoon of herbs, infused for a short time.
TINCTURE: Yarrow flowers, picked in the sun, are placed loosely into a bottle. 38% to 40% rye whiskey or vodka is poured over them and the bottle is left in the sun or in a warm place for 14 days.
YARROW OINTMENT: 90 gm. unsalted butter or lard are heated, 15 gm. freshly picked, cut Yarrow flowers and 15 gm. finely cut Raspberry leaves are added, stirred till crackling occurs and removed from the heat. The next day it is slightly warmed, pressed through a piece of linen, poured into clear jars and stored n the refrigerator.
SITZ BATH: 100 gm. Yarrow (the whole herb) are steeped in cold water overnight. The next day brought to the boil and added to the bath water (see General Information "Sitz Bath").
Tags: Abdomen Cancer