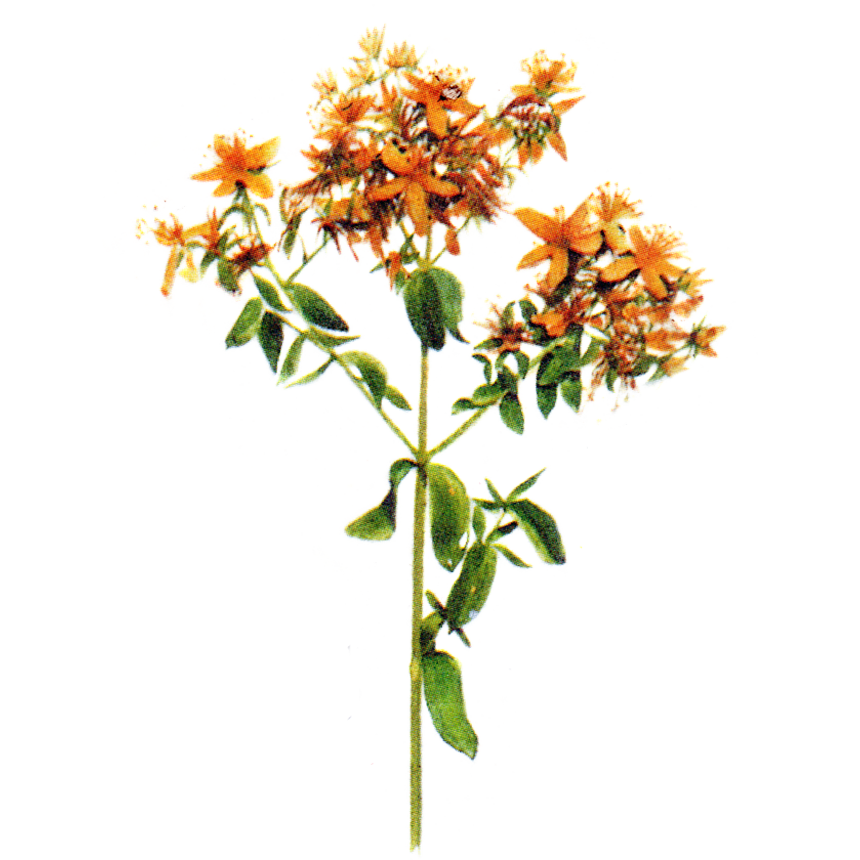 St. John's Wort
Hypericum perforatum
Scientific Name
This plant grows in meadows, hedges, woodlands and on roadsides. It reaches a height of 60 cm., is much branched and its golden-yellow flowers, grouped in umbels, are easily recognized by the red juice they yield, when pressed between the fingers. The flowering plant is gathered for infusions and baths, the just opened flowers for the preparation of St. John's Wort oil.
Old Christian beliefs connected the fragrant, red juice of the flowers with the blood and wounds of Jesus Christ. The fact is that St. John's Wort oil is the best wound oil, it soothes the pain, is anti-inflammatory and healing. Legends dedicate this herb to Saint John the Baptist.
In earlier times, maidens twisted garlands of St. John's Wort and wore them, dancing around the fires on Saint John's day. ln this mysterious night, branches of the herb were thrown into the water to show the maidens who would be their suitor in the next year.
According to an old custom, the farmers in upper Austria fed St. John's Wort, placed between 2 layers of bread, to the animals to keep them free from all diseases. In these days it is done only rarely.
St. John's Wort tea is used for injured nerves and nervous affections, for injuries caused by a blow as well as a consequence of strain.
For trigeminal neuralgia, two to three cups of St. John's Wort tea are sipped daily and he affected area is rubbed with St. John's Wort oil. A tincture of St. John's Wort, easily prepared, is described as, Arnica of the nerves" and is effectively used for nervous complaints, neuritis, neurosis, sleeplessness and nervous debility.
Speech disorders, fitful sleep, hysterics, sleeps walking are remedied with St. John's Wort, as well as bed wetting and depressions. My experiences show that for all these disorders, besides the use of the tea internally, sitz baths can be very beneficial (see "directions"). 1 sitz bath a week, followed by 6 consecutive foot baths. This course of treatment is recommended for all nervous complaints.
Girls during puberty should drink 2 cups of this tea daily for a length of time. lt strengthens the female organs and promotes regular menstruation.
A much valued natural remedy is St. John's Wort oil. No home should be without it. It is easily prepared (see "directions") and keeps its healing properties for two years. lt is not only used for open wounds, fresh wounds, contusions and glandular swellings and as an effective massage oil, it relieves sore backs, lumbago, sciatica and rheumatism. To have an effective remedy for burns and scads, the flowers are macerated in linseed oil. This oil is also used for sunburn.
Babies, suffering from abdominal pain, are easily soothed by gently rubbing their tummy with St. John's Wort oil. I know a farmer's wife who uses this oil for all injuries, even on the animals. Her husband once hurt his hand badly in a machine. Compresses made of St. John's Wort soon eased the pain and the wound healed without problem. Another farmer treated his horse's external foot-injury with this oil.
A doctor diagnosed a swelling of the lymphatic gland in the abdomen of an 8 year old girl. Every time she was affected by the cold, internally or externally, she suffered from abdominal pain, especially in the morning. Her mother read that St. John's Wort oil is used successfully for all glandular swellings. Therefore she rubbed the child's stomach with this oil, every time she complained of pain, with success.
DIRECTIONS
INFUSION: 1 heaped teaspoon per ¼ litre of boiling water, infused for a short time.
OIL: The flowers, picked in the sun, are placed loosely in a bottle and fine olive oil is poured over them. The flowers have to be covered. Well stoppered, the bottle is left to stand in the sun or near the stove for a few weeks. After a time the oil becomes red. lt is strained through a cloth, the residue well pressed out and stored in dark bottles. For burns and scalds, linseed oil can be used instead of olive oil.
TINCTURE: 2 handfuls of flowers, picked in the sun, are macerated in 1 litre of rye whiskey or vodka for 3 weeks, in the sun or in a warm place.
SITZ BATH: A bucketful St. John's Wort (stems, leaves and flowers) is steeped in cold water overnight. Everything is brought to the boil the next morning and the liquid added to the bath water. The bath should last for 20 minutes (see General Information "Sitz Bath").